PRESENTATION OF THE CENTRE COLLECTION

The Centre Collection covers a broad chronological range, allowing us to determine the milestones in José Guerrero’s career as an artist.

As vestiges of his years of training in Granada, Madrid and the various parts of Europe he travelled through, four works have been chosen to exemplify the artist’s fundamental concerns and the influences of his early teachers. La aparición [The Apparition] (1946), Panorámica de Roma [Panorama of Rome] (1948) and Dos hilanderas [Two Spinners] (1948) contain very clear references to Matisse, as regards the use of colour, and also show the influence of Picasso’s cubism, all within the framework of the figurative renovation he attempted on concluding his studies. 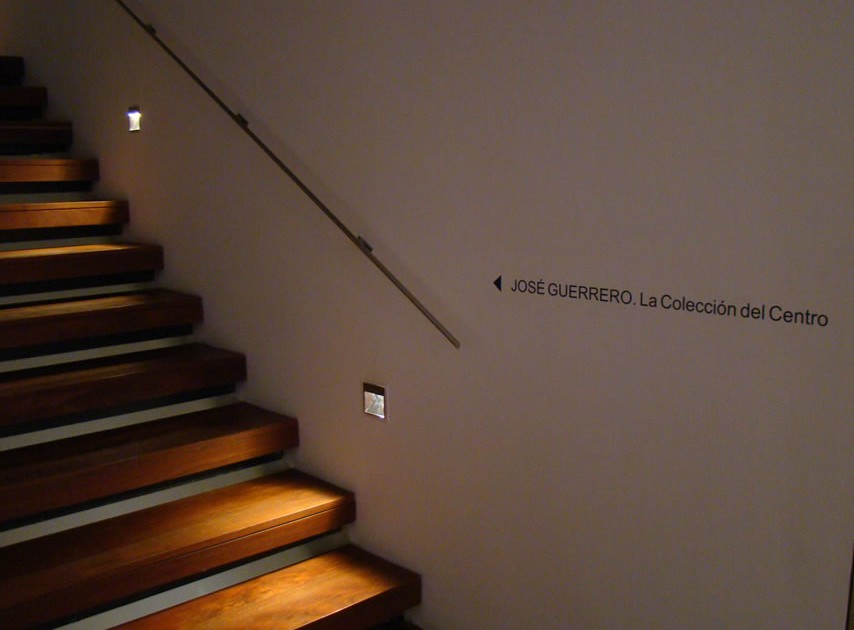 But it was his move to the New Continent that gave a different character to Guerrero’s work, as his contact with the North American art scene caused a great commotion in the painter. Perhaps the piece that best represents this new situation is the Self-Portrait (1950), which plays the role of a bridge between his European production of the 1940s and the new direction he took on finally settling in New York.

It was in New York that an experimental phase took place when figurative language was formally refined until it led to so-called biomorphic abstraction, which in Guerrero’s case began with a strong influence from Joan Miró, but evolved gradually towards gesture. Examples of this are Signos [Signs] (1953), Black Followers (1954), Sombras [Shadows] (1954) or Ascendentes [Ascendents] (1954). As the human figure ceases to obey mimetic patterns, it becomes simplified, taking the form of ovals, half arches, crosses or irregular masses, and the background becomes a monochrome, but vibrant field on which the signs float.

Thereafter, and until the mid-1960s, Guerrero became fully involved in the American expressionist movement, where he held an outstanding position. He then began to include gestural strokes in his canvasses with greater decision, and, although very restrained, dripping technique also appears. He constructed the spaces with flat shapes, revealing the intense emotional activity of the artist faced with the canvas, and how creation arises out of action. However, his attitude is closer to the positions of his friends Kline or Motherwell, than those of Pollock or de Kooning. Variaciones azules [Blue Variations] (1957), Penetración [Penetration] (1961), Grey Sorcery (1962) and Black Ascending (1962-1963) all belong to this period.

Together with these, we find another set of canvasses whose titles refer back to images from Guerrero’s childhood and youth in Granada. Indeed, as he matured and became more physically distant from his roots, he found ever more inspiration in the realities and images of his birthplace. Albaicín (1962) is one of the first works in this series, followed by others such as Arco [Arch] (1964) and Aurora gris [Grey Dawn] (1964).

This new thematic orientation, which put his newly conquered expressive resources at the service of an intensely emotive evocation, coincided with his trips to Spain in 1963 and 1964, until he found a new stylistic direction to broaden his horizons in 1965, when José and his family returned to settle in Madrid for just over three years.

His work from this period transmits more serenity and shows more forceful shapes placed on backgrounds of pure colour. Black is almost always present, and the boundaries between the masses of colour are clear and condensed.

These years produced one work fundamental to his entire career, La brecha de Víznar [The Breach of Víznar] (1966) – a dramatic elegy on the death of Federico García Lorca and a turning point in Guerrero’s painting. The understanding he obtained from this painting, its digestion and development, were to occupy him until the end of the decade. Paisaje horizontal [Horizontal Landscape] (1969) is one example of this.

After this, Guerrero, who was never one to remain at a standstill, began a series of compositions based on vertical elements focusing the canvas. This new stage of research culminated in his best known series in Spain – Phosphorescences, whose first examples date from 1970. In essence, these works were based on the ordered nature of an everyday object, in this case matchbooks. This is clear in Black Arches (1970), Solitarios [Loners] (1971), Intervalos negros [Black Intervals] (1971), Fosforescencia [Phosphorescence} (1971), Solitarios [Loners] (1972), Penitentes rojos [Red Penitents] (1972) or Penitentes [Penitents] (1972). But soon the heads of the matches, after becoming free from their sticks, gave rise to new constructions, as we can see in that extensive set of his production including Alcazaba (1973), Señales amarillas [Yellow Signals](1973), Crecientes horizontales [Horizontal Crescents] (1973), Límites [Limits] (1974) or Lateral negro [Black Side] (1974).

Finally, Guerrero’s work in the eighties remained caught up in this apotheosis of colour, which became increasingly intense as the years passed. In the mid-eighties Guerrero adopted enormous formats with a clearly intimate inspiration in landscape, such as Cuenca (1986), together with other, increasingly stripped-back, perhaps less constructed canvasses, until the last years of his production, when he joyfully gave himself up to colour for colour’s sake, as we can see in Oferta en rojo [Offering in Red] (1988), Azul añil [Indigo Blue] (1989), or Verde de sapén [Pine-tree Green] (1990). As Guerrero once said:

«colour is not just colour, but communication, energy, transition.».