Suscribirse
You are here: Home1 / The center2 / SERVICE CHARTER

The José Guerrero Centre is a contemporary art museum forming part of the Diputación de Granada, and was inaugurated in the year 2000. It came into being with the aim of incorporating a new patrimonial value to the city and province of Granada. It main aims are to conserve the Centre Collection, exhibit it, disseminate it and research into Guerrero’s work, together with the promotion of contemporary art and culture.

The José Guerrero Centre occupies a building rehabilitated and adapted to all the demands of current museum practice by the architect Antonio Jiménez Torrecillas, under the supervision of Gustavo Torner. The original building was constructed in 1892 by Indalecio Ventura Sabatell according to plans drawn up by the architect Modesto Cendoya. The rehabilitation of the building, given an award by the Granada College of Architects in 2003, centres round the idea of the museum visit as leitmotiv, while also taking advantage of the architectural theme traced by the original building – the exterior opens onto the street, while the interior closes in upon itself, creating a space favourable for aesthetic contemplation. 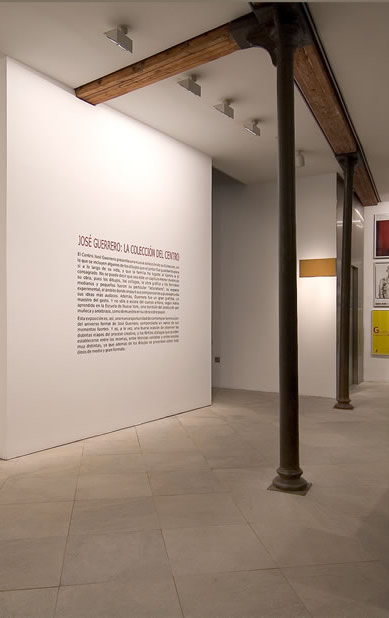 The functions of the José Guerrero Centre focus essentially on three areas:

Temporary exhibitions are organized by the Centre using its own assets, and also as co-productions or in collaboration with other museums and galleries.

The permanent collection brings together the tasks that fulfill the inherent functions of a museum institution – the conservation, cataloguing, restoration, research, dissemination and exhibition of its assets.

The José Guerrero Centre offers itself as a space for participation, reflexion, public action and interrelation between different artists, collaborators, curators and audiences. It therefore promotes activities such as lecture cycles, concerts, film, workshops, publications, guided visits, etc., in order to fulfill it educational, training and research functions.

Different activities take place in the Centre in relation to the visual arts or other creative areas that wish to take part, offering a panorama of contemporary creation – cycles of concerts of modern music, workshops in collaboration with different levels of educational establishment, audiovisual shows, lecture cycles, and the publication of catalogues and artist’s books, all of which make the Guerrero Centre a diversified cultural catalyst set into the fabric of the city.

The José Guerrero Centre carries out a teaching programme designed to disseminate not only the José Guerrero Legacy, but also the temporary exhibitions, which are analyzed for a broad public, with particular emphasis on school children.

The Centre’s bookshop offers for sale the catalogues and art books published by the Diputación de Granada as a result of the exhibitions held in its rooms and the rooms of the José Guerrero Centre, as well as educational material and other collections concerning other fields of knowledge.

The José Guerrero Centre’s collection consists of forty works on canvas, twenty on paper, a personal archive and an art library. At all times the Centre will maintain a representative selection of the collection in one or more of its rooms, however its presentation will be dynamic in nature.

The services and rights contained in this Charter shall be applied and recognized according to the following commitments:

The degree of compliance with the commitments established can be followed by the quality indicators, which show:

Members of the public who consider that the José Guerrero Centre has failed to comply with the commitments expressed in this Service Charter can write to the management of the Centre by letter or by e-mail. Complaint forms are also available.

Members of the public are encouraged to help us to improve the services provided by the José Guerrero Centre by expressing either their complaints or their suggestions in writing to the museum’s managements or via e-mail at info@centroguerrero.org

The Friends of the José Guerrero Centre Association